Chance Is Not Out of Danger Yet

** UPDATE ** Although every effort was made to save Chance, sadly, his injuries were too severe. He passed away peacefully and no longer suffers.

Although Chance is lost, there are many horses who need your help.


As I reported to you in March, the sheriff’s department for New Harmony, Utah was notified by someone in that community of a dead horse at a neighboring property. What they found were three dead horses, and a fourth horse near death from severe starvation, dehydration and neglect.

The Sheriff contacted us, we removed the colt from the abuser’s hands and brought him here to Dust Devil. We named him Chance.

Since then, Chance spends his days recovering from his horrendous ordeal. He has been examined by our trusted veterinarians, Drs. Brinkerhoff, one of our farriers, who specializes in severe foot problems, has treated his neglected feet, fed and clean water is kept in front of him at all times, he’s getting more love than he has ever known in his short life, and it looked like he was finally out of danger…

…until I received a call from Dr. Brinkerhoff last night. 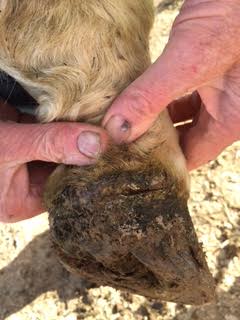 Because Chance has shown lameness and pain in his feet due to the long-term neglect, the vet took x-rays of Chance’s feet on Monday. Unfortunately they DID NOT reveal good news. The damage inside of one of his feet is far more extensive than any of us could have known.

Prior to Chance’s rescue, he suffered an injury of unknown origin to his foot… and it’s clear that it was many, many months ago. The vet believes it’s a deep abscess that was never cleaned or treated and, consequently, has not only never healed, but it continues to fester and cause him pain.

Dr. Brinkerhoff believes that because Chance’s wound was neglected for so long that the abscess has expanded and cracked the bone in his foot. Worse, the deep location is preventing it from being treated in the usual way… it can’t be cleaned and drained. It just continues to expand. At this point, surgery is the only treatment option.

Sadly, had his wound been cleaned and treated when it occurred, it likely would have healed without any further problems.

At this moment, I’m waiting to receive Chance’s X-rays to send around to our consulting veterinarians and to Jen, the farrier over at Best Friends.

I will let you know of the outcome after I’ve been able to discuss Chance’s situation with the vets and farrier.

Chance is facing a long – and expensive – recovery if we elect foot surgery. Dust Devil Ranch is facing a huge expense – somewhere between $3,500 and $4,500. And it doesn’t end there. Following surgery, he will need to remain at the vet clinic for a period of time – between 2 weeks to 2 months – plus he will need antibiotics, at a minimum cost of $300 per day.

The hard truth is that without surgery, Chance’s foot will not heal. He will continue to live in pain, and ultimately, it’s not likely he will survive.

You can understand why we desperately need donations in order to save his life.

Chance’s abusers are scheduled for hearings on Tuesday, April 25th, at 9:00 am and 2:00 pm, in St. George. I’ll be there and if you would like to attend as a show of support, the courthouse location is listed below…

This site uses Akismet to reduce spam. Learn how your comment data is processed.